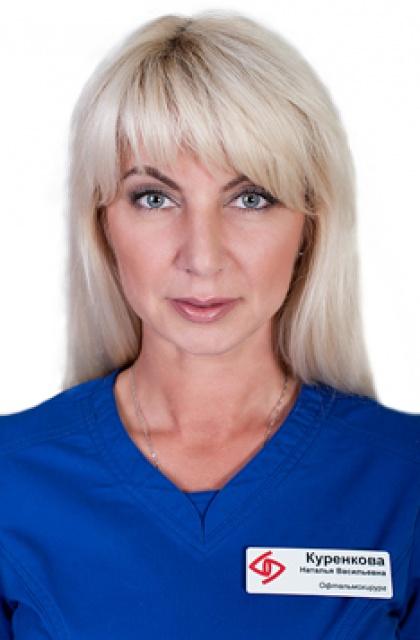 Candidate of Medicine. Refractive ophthalmic surgeon. Head of the Laser Vision Correction Department. Member of the Society of Ophthalmologists of Russia and the European Society of Cataract and Refractive Surgeons (ESCRS).

In 1993, she graduated from the Russian State Medical University named after N.I. Pirogov by specialty “Pediatrics”.

In 1993, she took a specialized course in optics and contact lens vision correction.

Since 1993, ophthalmologist of TOO Medical Research and Production Company “New Vision”.

1995-1997, clinical residency in the Research Institute of Eye Diseases of the Russian Academy of Medical Sciences, by specialty “Eye Diseases”.

In 2000, she defended her thesis on the subject “Prevention and treatment of complications of laser-assisted in-situ keratomileusis” in the Scientific Research Institute of Eye Diseases of the Russian Academy of Medical Sciences.

In 2000, she took a specialized course in laser medicine.

In 2002, she was appointed Deputy Head of the Research Department “Eye Microsurgery”.

In 2004, she was appointed Head of the Surgical Department of MNIOTS “New Vision”.

In 2006, she took a specialized course in laser medicine in FGU “State Research Center for Laser Medicine of Roszdrav”.

In 2008, she took a specialized course in phacoemulsification.

In 2009, she took a specialized course in crosslinking.

In 2010, she was appointed Head of the Laser Vision Correction Department.

Kurenkova Natalia Vasilievna is a highly qualified ophthalmologist. She masters all modern methods of diagnosis and treatment of eye diseases. She specializes in excimer laser surgery, performs various kinds of photorefractive surgeries. Regular participant and speaker at Russian and international scientific conferences, congresses and meetings of ophthalmologists. Author or co-author of scientific papers, scientific and popular articles. Owns a Russian patent for her invention in the field of refractive surgery.