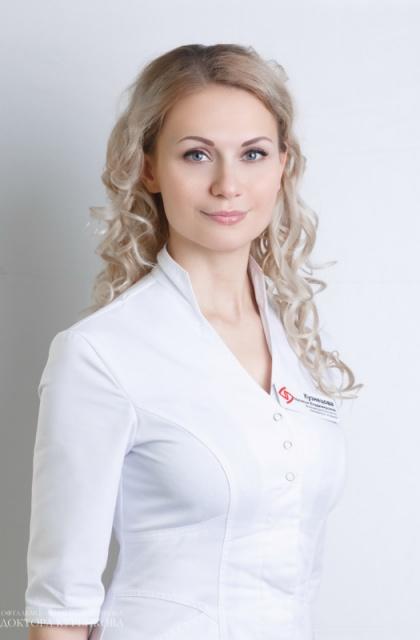 In 2004 she graduated from the Russian State Medical University named after N.I. Pirogov. During her studies she took an active part in student scientific circles.

From 2004 to 2006, clinical residency in MNII of Eye Diseases named after Helmholtz. Upon completion of her studies she was qualified as “Ophthalmologist”.

In 2006, she studied “Laser treatments in ophthalmology and fluorescent angiography of the retina” at the Research Institute of Eye Diseases, Russian Academy of Medical Sciences.

From 2006 to 2010, ophthalmic surgeon of the Laser Ophthalmology Department of the Main Clinical Hospital of the Russian Interior Ministry.

Since 2007, ophthalmologist of the Central Hospital of the Russian Interior Ministry.

In 2008, she took postgraduate courses at the Medical Refresher Institute, FGU “National Medical and Surgical Center named after N.I. Pirogov”, according to the program “Laser surgery in ophthalmology”.

Since 2011, ophthalmic surgeon at the Department of Vitreoretinal Pathology and Laser Treatments of CJSC Doctor Kurenkov’s Clinic.

Kuznetsova Natalia Vladimirovna is a qualified ophthalmologist. Since 2006 she has been annually performing over 1,000 laser surgeries in diabetic retinopathy, thrombosis and other vascular diseases of the retina, retinal detachment, peripheral breaks and retinal dystrophies, age-related macular degeneration, macular edema, secondary cataract, glaucoma of various geneses. She masters modern methods of diagnosis and treatment of eye diseases.

Kuznetsova Natalia Vladimirovna specializes in diagnostic and functional methods of examination and treatment of anterior and posterior segments of the eye, as well as excimer laser surgery. She masters all modern therapeutic and surgical methods of treatment of retinal pathology. Active participant in scientific conferences, congresses and meetings of ophthalmologists, both in Russia and abroad. Speaker at Russian and international conferences. She is the author of scientific papers and scientific articles.